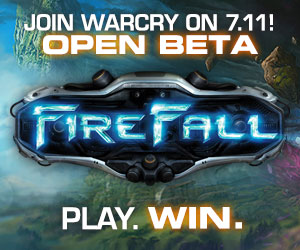 Firefall officially enters open beta on July 9 and to celebrate we're inviting you to join us in the virtual world for the chance to score some awesome in-game prizes.

Firefall is a new massively multiplayer online game that falls somewhere between "roleplaying game" and "sci-fi shooter" on the genre spectrum. It's been in various stages of beta testing for the past few months, but come July 9 the game will enter open beta, allowing the general public to experience the title en masse. We'll be among those exploring the new virtual world, and you should join us - not only because we're intensely charming and make great company, but because you could win a number of Firefall prizes.

Click here to head to WarCry's Firefall Event headquarters to enter to win and find us in game.

Here's how it works: On July 11-13 and again on July 24-26, The WarCry team will be playing Firefall live on Twitch from 4PM to 7PM Eastern Daylight Time. The Firefall open beta client can be downloaded for free on the game's official site, so once you've pulled the file down you can join us in-game which automatically makes you eligible to win one of the in-game prize packs we'll be handing out to lucky participants.

There are 24 prize packs in total, with 12 each week. Each prize pack includes a swath of in-game gear that you'd otherwise have to shell out real-world cash to acquire. Each week, ten runners up will receive an "Operator Starter Pack" which would normally set you back $35, while the two grand prize "ARES Starter Packs" each week feature a $180 retail price tag. Needless to say, you'd probably rather pick these packs up gratis while hanging out with us, than having to shell out the cash.

For full details and all of the information you need to officially sign up for the giveaway, visit the event's official site. Then start practicing your witty banter. There's nothing worse than being caught in a pitched firefight and quipping something about feather dusters while the rest of us are ripping on some poor virtual monster's fat mama.

Miracle of Sound: The Call (The Elder Scrolls Online) MiracleOfSound 38 Comments
Comments on