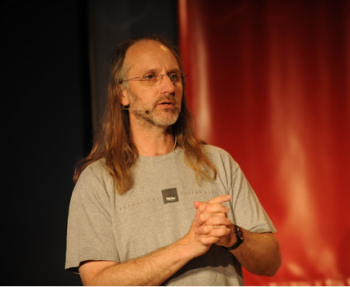 According to Electronic Art's chief creative officer, Triple-A studios have decreased while the number of developers remains the same.

If you're trying to gauge the health of the videogame industry, what would you measure it with? For better or worse, growth is usually the go-to response. Most of us examine expanding markets, increasing sales, and other size-related factors while determining whether everything is hunky-dory for the year. So when EA's chief creative officer, Richard Hilleman, states that the number of Triple-A studios has decreased this generation, that means the market is unstable, yes? According to Hilleman however, the industry is actually supporting the same number of employees across fewer expanded studios, which might indicate stability for the upcoming generation.

"What is true today is that there are fewer AAA games being built than at the same point in the previous generation," Hilleman writes. "I've done some calculations that say there were about 125 teams in the industry worldwide working on what I'd call a AAA game on a console, and that was 7 or 8 years ago ... That number today is well south of 30; probably in the 25 range. What's interesting is that, if you look at the composition of those teams, the numbers are exactly the same: those 125 teams became 25; the size of the teams increased by a factor of four."

Hilleman attributes this change to the gradual shift between standard and high-definition televisions. As HD became the norm, certain teams expanded to better produce enhanced visuals, while other studios dissolved or switched markets entirely. "This has everything to do with the standard definition to HD change," Hilleman continues. "If you look at the math, that change is about content - richly about content - and as we evolved, our costs went substantially up. And the number of people on teams with that kind of vision went up by necessity."

Hilleman suggests that, since HD televisions have effectively overtaken the market, this upcoming generation may be a more stable one overall. "I don't see that kind of content-oriented change coming in this next generation of platforms," he explains. "As a result, I think we were on a path that made me nervous, but it seems to have stabilized." Of course, whether this stability is sustainable remains to be seen. The very definition of Triple-A games has always been a nebulous concept at best, and it's entirely possible that some upstart new technology could arrive and upset the balance.