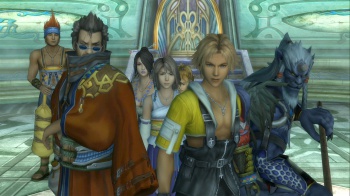 Final Fantasy fans will be able to play on the go and pick up where they left on the big screen when they get home.

Sometimes you just want an epic role-playing game that you can take on the go. Something you can whittle away at on bus trips or enjoy for hours without bogarting the television and earning the ire of your friends and family. On the flipside, there are RPGs that were clearly made to be enjoyed on a big screen. Square Enix games, generally rife with the prettiest visuals that money can buy, are prime examples of titles that could arguably lose their luster if forcibly shrunk down. Rather than being forced to choose between convenience and cinematic grandiose however, Square Enix has revealed that players will be able to have their portable cake and eat it too.

Speaking at Paris's Japan Expo 2013, Square Enix's Yoshinori Kitase revealed Final Fantasy X/X-2 HD Remaster on PS3 will have Cross Play functionality with the Vita versions of the Final Fantasy X and Final Fantasy X-2. The catch, of course, is that the games, as of yet, have no Cross Buy functionality, meaning you'll need to buy a PS3 copy and then the two Vita ports, which are being sold separately rather than as a bundled package. While the prospect of having to buy multiple copies of the same games to access Cross Play is liable to turn off some whose pockets aren't lined with expendable cash, it's far from unprecedented. The PS3 and Vita versions of the Metal Gear Solid HD Collection for instance, had Cross Play but were similarly sold as separate products absent of Cross Buy.