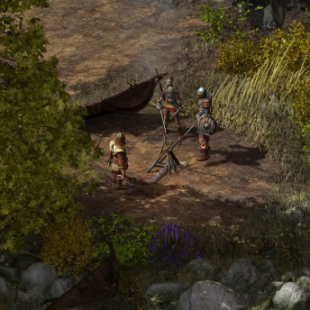 When Obsidian asked if the world wanted a new isometric RPG, gamers responded loudly and with their wallets. Over the course of its Kickstarter campaign, Obsidan's Project Eternity would raise nearly four million dollars. Since then, the game has been giving fans of the Infinity Engine hope for a new future of deep, well-written, isometric RPGs. According to Chris Avellone, creative director for Obsidian, that's a future the studio would love to pursue. "If we had multiple isometric hardcore role-playing games going on at the same time, with the scale of Eternity, that is something I think we'd be very very happy about as a studio," said Avellone.

Despite this, Avellone has no misconceptions about what it would take for such prospects to become a reality. Even just a sequel to Project Eternity would depend on "if the first game does well enough and generates enough profit." Which isn't to say that poor sales would doom Project Eternity to be a one shot return to isometric RPGs. "I don't think there is any reason for Obsidian not to approach Kickstarter again," said Avellone. "It's just that if we did, we'd want to have a compelling concept for it."

Even if Project Eternity winds up expanding beyond current plans, Avellone believes there are limits to how far it might go. "I don't know if [Project Eternity] would grow into the console arena," said Avellone. "I wouldn't want to change the format for how Eternity is presented and the more Windows-focused aspects of it." According to Avellone, the mentality driving Project Eternity simply may not be compatible with console gaming. "Our goal was just to make a PC-focused, much more keyboard-driven - something that's a bit more, for want of a better word, old-school. We enjoyed making those old Infinity Engine games. I don't know that they'd work as well on consoles, which was one of the reasons we focused on Windows in the first place."