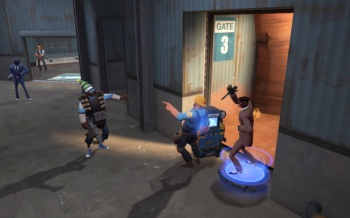 Team Fortress 2 has been closely tied to Steam's Workshop for two years, and for the most part it's worked out well for Valve. Not only has the hat-and-weapons-based economy grown by leaps and bounds, the developer was able to release an entire official update based exclusively on community content. Unfortunately, beneficial as all this custom loot may be, it carries certain drawbacks in-game. The original TF2 maps weren't designed to accommodate hundreds of additional items, leading to unforeseen bugs and exploits that players can take advantage of. According to Valve, Team Fortress 2's incoming update goes a long way towards fixing the problem, and also includes two community maps for your gaming pleasure.

"TF2 has been evolving since the day we released it back in 2007," a Team Fortress 2 blog post reads. "Unfortunately, as players' tactics and abilities have grown, so have the bugs and exploits in some of the maps. For example, since Badwater shipped in The Heavy Update, TF2 has added more than 140 weapons to the game, some of which introduced new capabilities: sentry jumping, rocket jumping with no health cost, the ability to pick up and move your buildings. All of these are just a fraction of the many ways players can now turn maps like Badwater upside down."

The post goes on to describe how players can "sentry jump" weapons to out-of-reach rooftops, or construct buildings inside a team's spawn point. In response, Valve has eliminated a number of exploits across most maps, rebalancing Team Fortress 2 for anyone unfamiliar with the exploits. "While we love players coming up with new and inventive ways to win," the post continues, "let's face it: It's never fun to be gunned down from above and behind."

As comprehensive as the update would already be, it will include more than just exploit fixes. Valve previously stated that it will feature gold star, community-made content, and has revealed two Capture Point maps as teasers. Created by Ian Cuslidge, each map strongly embodies TF2's iconic environments, but were selected for their intuitive layouts and lack of visual noise.

Valve has promised to post additional details on the update as we approach its release. Still, I have to wonder: If Valve uses an update to fix custom exploits, but packs it with more community content, how long will it be before we need yet another comprehensive bug fix?