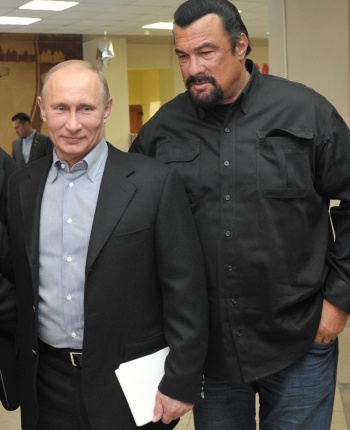 Word from Bulgaria (the shooting location for The Expendables 3) has it that Mel Gibson and Steven Seagal will be the next stars to join the latter-day action hero franchise.

The Expendables 3 is currently filming in Bulgaria. This being a major Hollywood production, the Bulgarian media is all over the project. Thus, while we have to earmark this news as a rumor, when multiple sources in that country start to claim that Mel Gibson and Steven Seagal will be joining the film's cast, we can't help but report on the morbidly interesting news.

Today many Bulgarian news sites have reported again that Gibson has negotiated (or is) with Stallone to play the #1 villain role in [The Expendables 3]. In addition to reporting Gibson, there are now new elements in the Bulgarian reports confirming that Seagal will fight Gibson alongside Stallone, Statham & Lundgren, and that the script has been rewritten many times to create enough room for so many stars specially after Schwarzenegger has joined the cast, and to include Chan, Cage, Snipes, Jovovich & Rourke.

As the EXBlog report points out, there's no official source on this news beyond Bulgarian media outlets, so it may be a false claim or a misunderstanding. However, this information does square with prior reports on the film and adding Seagal and Gibson to the cast would seem perfectly in line with star Sylvester Stallone's vision of this franchise as something of an all-star mashup of overtly-masculine action heroes whose halcyon days ended circa 1995 (if not earlier).

A few moments ago I described this information as "morbidly interesting," for two very good reasons. The first would be Steven Seagal's current body shape. If you haven't seen the actor for the past decade, you could be forgiven for assuming he's still a badass martial artist. In fact though, he's put on quite a bit of weight and, not to be catty, but the man just looks bloated. Like the week-old corpse of an elk. That's a recent picture of Seagal inexplicably hanging out with Russian President Vladimir Putin embedded at top-right, and well, you've got eyes.

The second reason would be Mel Gibson's very public drunken, anti-semitic outburst from a few years back. Not only has he repeatedly defamed the Jews, he also sexually harassed a female police officer, and a short while later it was revealed that Gibson's relationship with then-wife Robyn Moore could be best described as "chaotic" (though "emotionally abusive" would also be an apt descriptor, and the key reason for their divorce, in which Gibson lost $400 million).

Point being: Neither of these men is in their prime, and may be unable to even convincingly fake it. Possibly moreso than the current Expendables cast. If Seagal and Gibson do join the film, we doubt they'll bring much novelty to the formula, but maybe if we hope hard enough they'll at least be entertaining.