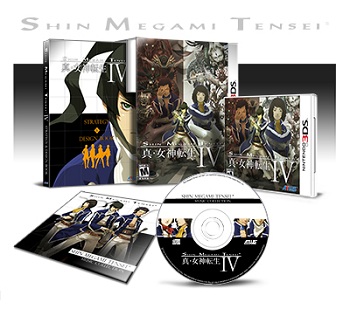 If you're a fan of role-playing games and also happen to own a 3DS, then the following might be of interest of you. Atlus the developer and publisher behind popular series like Shin Mega Tensei and Persona, has recently announced a limited time offer that could net you money to spend in Nintendo's eShop. Beginning on the July 16th, the release date for the highly anticipated Shin Megami Tensei IV, consumers who register both SMT IV and Fire Emblem: Awakening with Club Nintendo will be given $30 worth of credit to spend as they please. Both digital and retail versions of the games are eligible.

This offer represents a unique bit of collaboration between Nintendo and Atlus. It's also arguably pretty smart and potentially beneficial for both parties. Fire Emblem: Awakening made its mark when it launched, breaking sales records for its series. That being the case, there's a considerable base of Awakening owners for whom this offer could be the necessary nudge that convinces them to buy Shin Megami Tensei IV. Likewise, gamers who had planned on buying Atlus's upcoming RPG could potentially be convinced to go back and purchase Awakening if they skipped it at its release.

Not surprisingly, there are some catches to this deal. Firstly, you'll need to complete a survey after the registration of each game. More importantly, the deal comes with a time limit. Gamers intent on taking advantage of this offer will need to do so before August 31st. This means you'll probably need to buy Shin Megami Tensei IV at full price instead of waiting a few months and then ordering a used copy on Amazon like we know you were planning to do. That said, Shin Megami Tensei IV is looking to launch on the safe side of excellent, so it would probably be a good game to invest in any ways.