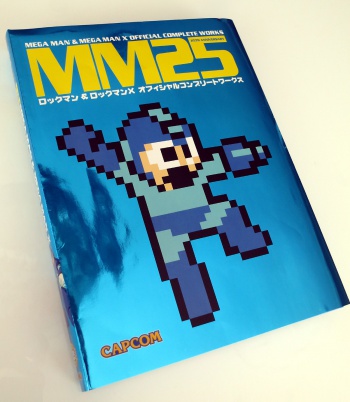 UDON is celebrating the 25th anniversary of the Mega Man franchise by releasing a new, hardcover art book.

Mega Man made his debut on December 18, 1987. Technically speaking, that makes the Blue Bomber closer to 26 years of age than 25, but as a Capcom property the firm will celebrate his birthday any time they please. This is the same company that celebrated the 25th anniversary of Street Fighter for three years running, so just forget about the specific dates here and instead be happy at the presents we're receiving for this particular birthday.

Specifically, I'm talking about UDON's newly-revealed MM25: Mega Man & Mega Man X Official Complete Works According to UDON's press release, the massive hardcover tome features "over 400 pages of official game art, concept designs and sketches, rare pin-ups, and all-new tribute art." Further, UDON also claims to have collected a number of rare production notes from throughout the history of the Mega Man franchise which have, for the first time, been translated into English.

So, how much will all of this Mega Man fan service set you back? $100. It's a big book, thus it features a big price tag. Don't act so surprised. As for when you can pick the book up, that depends on your near-term travel plans. While the book is slated to go on sale on July 17, attendees of Comic-Con 2013 who visit UDON's booth will have the first opportunity to buy MM25: Mega Man & Mega Man X Official Complete Works. Fortunately it's not a Comic-Con exclusive, or that $100 price tag would quickly double and triple.

There are a few sample pages in the gallery below, just in case you're still on the fence about this book. Here's hoping Capcom can hold off on canceling this Mega Man project before you figure things out.