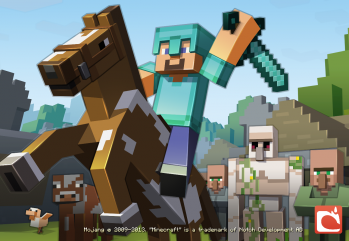 Minecraft is essentially a set of tools for creative individuals to play with, so it probably shouldn't come as a surprise that sometimes people like to make things within the game's sandbox. One recent trend among content creators is the rise of mini golf maps, called "Putt-Putt" maps by the community. Unfortunately, it seems nobody informed the owners of the actual Putt-Putt trademark, and they're not cool with this turn of events. A cease and desist letter misguidedly orders Mojang to stop infringing on the Putt-Putt trademark, despite all the content in question being user-generated.

Notch revealed the contents of the letter with all his characteristic legal tact:

It's pretty standard legalese, claiming that "Mojang AB's use of the Putt-Putt name has benefited Mojang AB to the detriment of Putt-Putt ... Accordingly, we require your prompt written assurance that Mojang AB, and each and every person, agent, and entity affiliated with Mojang AB, will immediately refrain from all use of the Putt-Putt trademark in connection with your business." That should be pretty easy, since Mojang has never invoked the name of Putt-Putt in any official capacity, though the lawyers might not be happy with that answer.

The letter includes a screenshot of a Google search for "putt putt craft," which turns up several user-made videos on the topic. Those videos may be in danger of getting pulled from Youtube on copyright claims, but right now it looks like Putt-Putt is barking up the wrong tree.