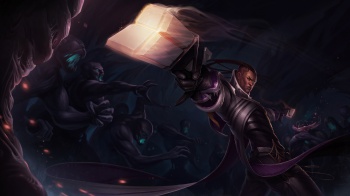 Lucian is a highly mobile ranged carry who "obliterates evil with righteous power."

The latest addition to the increasingly beefy League of Legends roster will be a new ranged carry: Lucian, the Purifier. Lucian has a very Christian Bale from Equilibrium vibe going on, and excels at pummeling opponents with quick shots, relentless dashes and a barrage of light-infused bullets. He's currently being prepped to be released with the next League of Legends patch, along with a rework of everyone's favorite spider-eyed samurai: Master Yi.

Lucian's abilities are as follows:

A highly-mobile ranged damage dealer, Lucian punishes enemies for straying too close. Once teamfights break out, Relentless Pursuit enables him to quickly escape unfavorable situations and kite pursuing opponents, or skirt around the enemy team to single out priority targets.

This news accompanies the release of patch 3.9, which while not containing Lucian, does offer some considerable tweaks to Draven, LeBlanc and Shyvana.