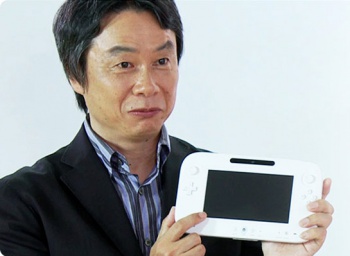 Some might accuse Nintendo of being a one trick pony. That's absurd, of course, because Nintendo has at least four or five tricks that we can think of just off the top of our head. Jokes aside, it's no secret that the house that Mario built is held up by some fairly consistent pillars. You have your Super Mario, Zelda, Metroid, Pokemon, Donkey Kong and maybe a few others that rear their family friendly heads every few years. As consistent as these franchises are however, some might also consider them to on the stagnant side as well. You can only stomp on so many Goomba before the experience starts to lose its touch.

Perhaps, recognizing this Shigeru Miyamoto, the creative mind behind pretty much all things Nintendo, has revealed that the developer/publisher has a brand new franchise in the works. Speaking with Famitsu, Miyamoto offered the following while discussing upcoming Wii U games. "[Next spring] we'll have a general selection available, so I've been thinking it would be a good time to bring out a new franchise." When pressed for further details he would continue, "I can't say too much in detail right now, but I've been pretty busy with this title these days." It's not much to go off of. That said, considering the level to which Nintendo relies on established properties, a confirmation that the company is working on a new franchise is still pretty huge. The big question, of course, is what in the heck will it be?