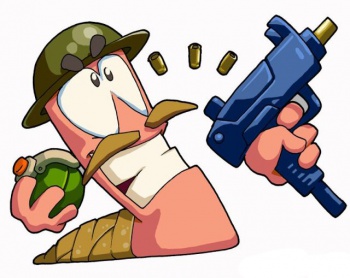 16 years after the debut of Worms 2, developer Team 17 has announced the game's first true sequel.

Worms 3 is coming! I can't believe I just typed those words, but yes, almost two decades after Worms 2 hit the PC (and then every other platform in existence), Team 17 has opted to create a proper sequel. The biggest difference between Worms 3 and its predecessors? This one is being developed specifically for play on iOS devices.

While Worms 3 will undoubtedly continue the franchise tradition of dropping players into the slimy boots of a squad of armless, anthropmorphic annelids, hell-bent on murdering one another using a vast arsenal of creative, often-wacky weapons, it also brings with it a list of new features. To wit:

There's currently no specific release date (beyond "Q3 2013," anyway) or pricing info for Worms 3, but we'll bring you word on all of that just as soon as it becomes public. In the meantime, we suggest taking a look at Team 17's officiall announcement of the game. It reiterates those new features we mentioned above, but goes into far more depth as to what exactly you can expect to see in Worms 3.