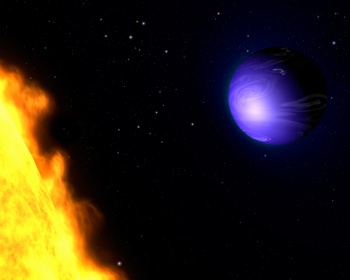 Officially dubbed "HD 189733b," the distant blue world appears similar to our own from a distance, but look closely and you'll notice a few, very significant differences.

63 light years away from Earth lies a planet that astronomers have designated "HD 189733b." First discovered in 2005, HD 189733b is a big, blue ball, superficially similar to our own from a distance, which instantly drew the attention of NASA scientists. Unfortunately, that pretty azure color has little to do with the planet's ability to sustain life and more to do with the silicate particles floating through the planet's intensely hot atmosphere.

Researchers claim that HD 189733b maintains a 2,000-degree Fahrenheit temparture and that winds can reach speeds of 4,500 miles per hour. As a result of this apocalyptic climate, those silicate particles mentioned a moment ago periodically condense into small pieces of glass. Not only do these shards refract light, creating the planet's blue coloration, they also have a tendency to accumulate until they're too large and heavy to remain floating in its atmosphere. This is when scientists believe they can fall to the ground, creating a planet where it occasionally rains molten-hot glass.

Astronomers describe HD 189733b as a "hot Jupiter," due to both its immense size - it's larger than our less-incendiary Jupiter - and because it lies extremely close to its nearest star. How close? A mere 2.9 million miles, which means that the planet remains "gravity locked" by the star. As a result of this overwhelming force, one half of HD 189733b is always lit, while the other remains in permanent darkness. The dark side of HD 189733b isn't quite as hot as its sunnier counterpart, and features relatively cool temperatures of a mere 1,500 degrees Fahrenheit. Those glass showers are less likely to occur in these conditions, but it's still not a great choice for a vacation destination.

As an aside, how cool is this? It's a planet with winds that travel at speeds six times faster than the Earthbound speed of sound. It's a planet where instead of pleasant rain showers, you could potentially be pelted by jagged shards of white-hot glass that would slice you to bits if you hadn't already burst into flames from the planet's crazy-hot atmosphere.

This is the sort of amazing phenomena that lies outside of our planet, waiting to be discovered. Here's hoping Earth's governments come to realize how much we're missing by focusing all of our money on warfare and other trivialities that, in the grand scheme of human existence, amount to depressingly little.