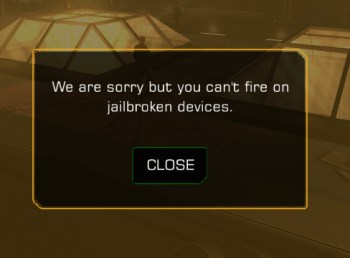 Deus Ex: The Fall won't allow players with jailbroken iOS devices to fire their weapons, according to a report on Reddit.

Jailbreaking, for those unfamiliar with the term, is the process of modifying iPhones and iPads in order to to gain full access to the operating system and software, thereby allowing the installation of unapproved software, unofficial customizations and that sort of thing. The U.S. government declared it legal in 2010 but Apple still takes a dim view of it and in most cases, jailbreaking your phone will void the warranty.

Even so, the experience of Reddit user KipEnyan is extremely unusual. When he attempted to stun an enemy shortly after he began playing Deus Ex: The Fall for the first time, a message popped up saying, "You can't fire on jailbroken devices."

"I've never had this happen before, on either a rooted Android device or a jailbroken iPhone, and I've used both extensively for years," he wrote in response to follow-up questions. "This is the first time I've ever seen a developer pull anything like this, and it is wildly unacceptable."

"This is massively offensive on Square Enix's behalf. The obvious implication is that all jailbreakers are pirates who more than likely pirated this game. I paid good money for this game and Squenix feels it's okay to break my game because I prefer to customize my iPhone to my liking," he wrote. "Jailbreaking was declared perfectly legal, so pulling shit like this shouldn't be."

According to Polygon, at least one user review on the App Store made the same complaint about the game, although the review it referenced no longer appears to be there. We've reached out to Square Enix for more information and will update if and when we hear back.