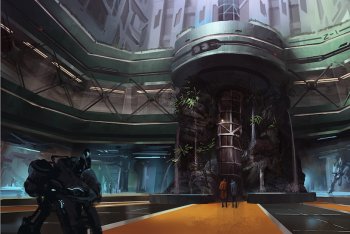 Obsidian has revealed some details on an action-RPG that could have been.

Obsidian Entertainment has a knack for building inspired games on the shoulders of other studios' engines. Bethesda passed the torch to Obsidian to continue the Fallout series with New Vegas, but it seems the two studios were considering another collaboration - this time on the Skyrim engine. Unfortunately it looks like the idea has been shelved for now, but a design document has surfaced that details what could have been a sci-fi action-RPG that blends Mass Effect, Borderlands, System Shock 2, and of course Skyrim.

The prototype game was known as Backspace, and the creative types at Obsidian seem to have put a lot of thought into the game's setting, story, and mechanics before it was abandoned. The game would take place on a giant space station - think Mass Effect's Citadel - which is ravaged by an alien attack. You'd play as a cyborg who somehow gets caught up in a time travel scenario, shifting between the present-day station (which is under active assault by the invaders) and a bleak decade into the future where the aliens have won and control the station. The design doc mentions several gameplay features, including skills that improve over time, fast-paced gun and melee combat, and a selection of AI "companions" to slot into your armor to give yourself stat boosts and provide dialogue in the mostly isolated setting.

Obsidian boss Feargus Urquhart commented that the team may work more on Backspace in the future, but it's just one of many ideas that the studio has considered and ultimately shelved. Still, it sounds pretty cool - and we can still dream.