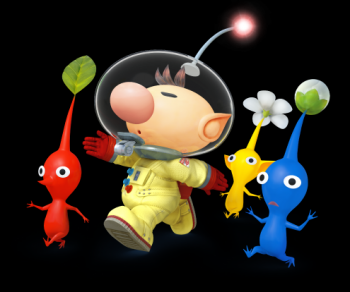 The latest update to the official Smash Bros. website reveals that Olimar and his Pikmin will return in the new game.

It looks Like Captain Olimar and his trusty Pikmin sidekicks/cannon fodder will be joining Mario, Donkey Kong, Link, Samus, Pikachu, Bowser and Pit as a returning character from Super Smash Bros. Brawl. An announcement on the official Smash Bros. website showcases a variety of Wii U screenshots of the Captain doing his thing.

In Super Smash Bros. Brawl, Olimar used red, blue, yellow, purple and white Pikmin in the majority of his attacks, with each one having a different ability. In the upcoming Pikmin 3, two new types of Pikmin make an appearance: the rock Pikmin and the flying Pikmin. None of the new screenshots show these new Pikmin, so it's not known if Olimar's arsenal will be extended in the new game.

Smash Bros. director Masahiro Sakurai previously stated that he was really "stressed out" deciding the new Smash roster, and that he was looking to cut down on some of the less unique characters from Brawl. Olimar, who was only introduced to the series in Brawl, is pretty much the definition of unique, so i'm glad he made the cut.

The last revealed character for the new game, the Wii Fit Trainer, raised a couple of eyebrows. Sakurai later justified her addition by explaining that she was "not a choice we made for the sake of cheap novelty."

What do you guys think? Does Olimar deserve his place? Are there other Brawl fighters that are more deserving? Considering the new Pikmin game is just about to come out, it does seem like a sneaky little bit of cross-promotion from Nintendo.