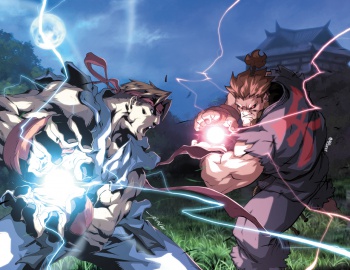 The annual EVO fighting game tournament opened its doors this morning, and thanks to the magic of the Internet those of you stuck at home need not miss a single crucial moment.

EVO is something of a mecca for fighting game fans. It's an annual tournament that pits the world's best virtual fighters against one another, and often features gameplay that is so far beyond what the average person is capable of that it becomes nigh-incomprehensible. Fortunately the fighting game community has been making great strides of late in its efforts to attract new people to the scene, and as such even those who can't attend EVO are quite capable of enjoying the festivities.

The first thing you'll need is a schedule of events. The second thing you'll need is a streaming service. Fortunately Twitch.tv has you covered on both fronts. Simply pay a visit to the official EVO channel, and you'll see a live stream of the currently played games as well as a handy spreadsheet documenting the latest streaming schedule. At the time this article was written, the stream is currently focused on a Super Street Fighter IV: Arcade Edition match between players calling themselves "Dr. Funkatronic" (Sagat) and "Hoo-Da-Man" (E. Honda).

Obviously, if you're watching EVO from home (or the office, or a particularly well-appointed tent in the woods somewhere) you won't get the full effect of actually attending the event, but at the same time you also won't be embroiled in any tiresome industry drama, or have to suffer the stench of those omnipresent con attendees who've apparently never met a shower they didn't hate. Still, if you're only in it to watch a bunch of fictional characters beat the stuffing out of one another in impressive fashion, you should keep an eye on the Twitch stream.