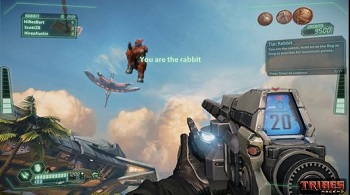 "A [Tribes: Ascend 2] would be more likely than a major update."

We here at The Escapist liked Tribes: Ascend when it launched in 2012. It's a good thing too, because it's not getting any larger. Hi-Rez studios has confirmed that it's suspending work on the free-to-play shooter as it focuses on other titles, like its new MOBA, SMITE.

It started with a post on the Tribes: Ascend subreddit, with someone asking why the game hasn't received an update in a while. Hi-Rez Studio head Todd Harris responded back, confirming that "there are no major dev updates planned for Tribes: Ascend in the next six months."

In the meantime, Hi-Rez Studios will be focusing most of its attention on new projects. "For the next six months our primary development focus is SMITE," he said. "Beyond that it is [Global Agenda 2]. And beyond that a [Tribes: Ascend 2] would be more likely than a major update to [Tribes: Ascend]; but to be clear no devs are currently working toward TA2."

Harris made it clear that this doesn't mean the death of Tribes: Ascend, as there will still be bug fixes and the occasional new map. "We continue to support TA servers, online community events, tournaments with prizing, bringing Tribes to offline events like recent RTX and upcoming QuakeCon, and live-streaming." While he mentions the possibility of new maps, he makes it clear that they have no set time frame for release.