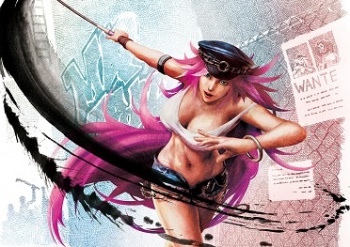 EVO is like Christmas for fighting game fans: the highest level players duking it out in their games of choice, peppered with panels from prominent developers in the fighting game scene such as Capcom. This year, at the Capcom panel, the developer announced a new update coming to its flagship Street Fighter IV, which includes five new characters.

The DLC adds fan favorites Rolento, Elena, Hugo, and Poison, as well as a fifth, as of yet unannounced character, who is completely new to the Street Fighter series. These five characters, as well as six new stages and a whole host of balance changes, will be heading to the PlayStation 3, Xbox 360, and PC versions of Street Fighter IV. If you own Super Street Fighter IV or the updated Arcade Edition, you can purchase the DLC for $15. Buying this DLC also nets you the previously released costume packs.

If you don't own Street Fighter IV, there will also be a new version of the game available for $40, which contains the base game, all of it's previously released updates, and this new update. It available both at retail and as a digital download.

In addition, you will receive special costumes designed by Udon for each new character if you preorder the game. The new update should also be released on the NESiCAxLive arcade network in Japan.

Capcom didn't offer an exact date, but said that the DLC should see release "in early 2014." The update's official name as well as an official release trailer should be released shortly.