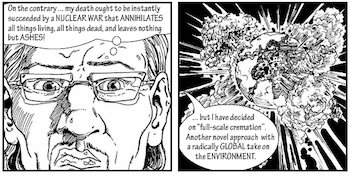 This experimental comic-style puzzle game uses psychology rather than logic.

If there's one thing that adventure games have taught us, it's that logic can be a fickle thing. For every predictable inventory conundrum, there are at least two Rubber Ducky puzzles. Perhaps recognizing that logic had no place in adventure games, developer Athletic Design created Strip Em All, a "psychological point-and-click adventure," where each puzzle explores the inner workings of the mind.

Each of the seven episodes are presented as a comic whose panels are out of order. More importantly, some panels can be swapped for alternate versions, some radically different than the original. With just a few changes, a comic about two kids talking about the promise of life becomes a story of a cynic bemoaning its futility. The goal isn't just to create a coherent comic, but to create one that demonstrates a given psychological profile.

Talking with Polygon, developer Ola Hansson explained why he made Strip Em All. "My main motivation was to prove [game designer] Chris Crawford wrong," Ola said. "He has often said that computer games are all about spatiality - moving around in a world or manipulating objects - and not about humans. This spurred me to make a game which is all about humans and not at all about spatiality."

It's certainly an odd title, and can be more than a little confusing at times. Perhaps something like this has application in the classroom. Psychologists can teach about the inner workings of the mind, and game designers can teach how not to make stupid puzzles with pixel hunts. Regardless, it's free and you can play it online here.