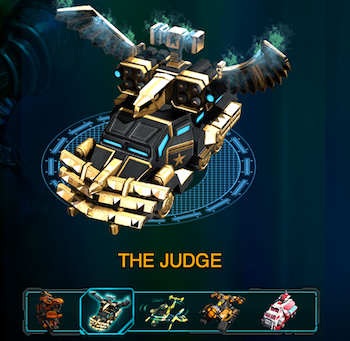 When we last saw the massively multiplayer strategy game End of Nations, it was facing an uncertain fate. First, development duties switched from Petroglyph to Trion due to layoffs. Then, Trion itself went through waves of layoffs and everything about End of Nations went silent. Now, seven months later, it has resurfaced as a free-to-play "tactical MOBA", a rather different tack previous incarnations.

When The Escapist last saw End of Nations in person, it was a rather odd mixture of MMO and RTS. Our Mike Kayatta called it "one of those sought-after 'easy to learn, hard to master' games that only needs as much of your time as you're willing to give," and liked it enough to put it on his "Best Of E3 2012" list. However, it seems that the game Mike played either exists no more, or is significantly altered.

Without the fanfare of a press release, the only information we have comes from the game's terse webpage. There, it's called "a fast paced military MOBA/RTS," where "your success on the battlefield depends on the heroes and units you command and quick decision making in the heat of combat." Perhaps the most telling bits are the handful of hero units on display, which all exhibit a charmingly silly Twisted Metal quality. For instance, there's Sidewinder the neon helicopter, Hippocrates the ambulance, and (my favorite) The Judge, a Megacity-esque cruiser with eagle wings and a hammer motif.

Interested parties can sign up for the beta, where Trion promises that it will share more information about End of Nations and its upcoming "alpha program" in the coming months.