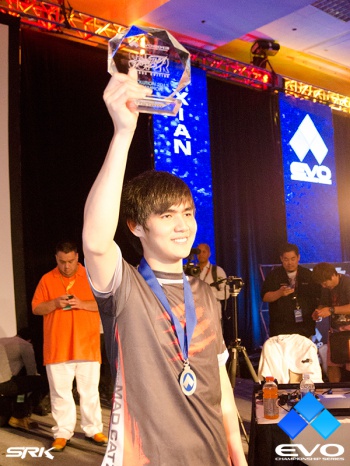 This weekend has probably been the most important weekend of the year for fighting game fans, with the 2013 Evo fighting tournament being held in Paris, Las Vegas. After three days of combo breakers, mix ups, air dodges, wave dashes, frame traps, and footsies, the champions of the event have risen above the competition to take the Evo gold. Here are all of your respective winners:

Fan favorite Daigo "the Beast" Umehara, referred to by the Japanese media as "God of 2D fighting games," came in at a respectable 7th place in the Street Fighter competition. "[Daigo] has risen above winning and merely wishes to express his true nature through fighting," said Seth Killian, former Capcom strategic marketing director of online and community.

Other than that, the Ultimate Marvel vs. Capcom 3 broke the fighting game stream record, with over 140,000 concurrent viewers tuning in to its twitch.tv stream. The record was previously set earlier in the night by Super Smash Bros. Melee (which Nintendo actually tried to block) with an impressive 120,000 viewers.