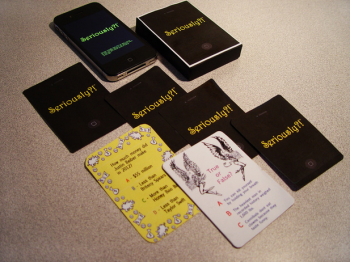 Seriously?! Yes, seriously. Would I joke about something like this?

Pong creator Al Alcorn, together with his uGetit partner and fellow Atari veteran Roger Hector, has turned to Kickstarter to fund his latest game project, a trivia card game called Seriously?!. Though calling it a card game may be oversimplifying, since Seriously?! is meant to be played on a smartphone or tablet. The device reads the card, the 'Siri'-style game hostess poses the question and judges the answer, as well as heaping on the shame - or praise - for those answers that really make the grade. New decks will be added as time goes by, with more true/false, multiple guess questions, videos, pictures, and everything else the developers can cram in. But that word 'developer' can also apply to backers, since anyone who kicks in - at any pledge level - can submit trivia questions which may be chosen for inclusion in the final game. One hundred or more accepted questions gets you a Master Game Designer credit, and a personal trivial card created just for you.

There are six different trivia categories: slackers (people), civilization's decline (history), visual stimulation (includes picture or video), twisted entertainment (showbiz) and creepy oddities (strange and miscellaneous). "Submissions will be judged on the basis of their universal appeal, creativity, humor, and originality," say the design team. "Don't get too obscure as only the best submissions stand a chance of acceptance." This will be an iOS and Android title with a free downloadable app, should it reach its goal.