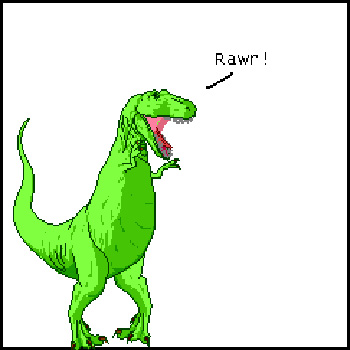 Though T. Rex may have scavenged food periodically, science now has proof that the quintessential terrifying dinosaur was a predatory hunter.

In 1874 geologist Arthur Lakes uncovered what would later be known as the first Tyrannosaurus teeth documented by the then-fledgling field of archaeology. Those wicked, curved chompers would form most of the early basis for what science (and to a greater degree, pop culture) imagined the Tyrannosaurus may have looked like in life. How could a creature with teeth like that do anything but chase down prey, tear its throat out, then feast on the bloody remains?

As sensible an assumption as this seemed, science spent the next century unable to find any fossilized proof of a T. Rex hunting anything. There was certainly evidence that the dinosaurs were scavengers, and periodically we'd find bones with tooth marks and tracks that suggest predation, but nothing that could conclusively demonstrate that the beast was a hunter. Until now.

Researchers digging in South Dakota recently unearthed the spine of a 4-ton, fossilized hadrosaurus in which was embedded a kitchen knife-sized Tyrannosaurus tooth. According to the scientists, the spine exhibited enough evidence of post-attrack bone growth to support an assumption that the hadrosaurus was injured, survived, then lived for quite some time after the tooth was embedded.

"The animal was attacked, survived and escaped," says University of Kansas Biodiversity Institute paleontologist David Burnham. "Until we found this specimen, people could say that T. rex was a scavenger; here is evidence it attacked living things."

In conclusion, three cheers for science! Normally it does nothing but disprove our awesome childhood fantasies, but in this case we learn that T. rex was exactly as terrifying a killer as we all assumed while walking out of Jurassic Park screenings circa 1994. Propers to science - and primeval reality, I guess - for not stepping on our collective childhood whimsy.