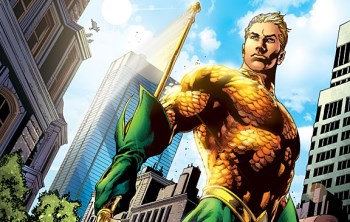 Research by online security company McAfee has determined that Aquaman is the superhero most likely to screw up your computer with spyware, viruses or other forms of malware.

Aquaman gets no respect. And really, why should he? He's probably a holy terror with the Clownfish Mafia or the Sea Turtle Yakuza, but on the surface - where crime actually happens - he's not exactly hell on wheels. He's a strong guy, sure, but let's face it, his hook (so to speak) is that he talks to fish. But there is one superhero list he tops: The list of heroes most likely to bugger up your computer by leading you to a threatening site.

According to online security expert Robert Siciliano, McAfee determined that searching for "Aquaman and free torrent download," "Aquaman and watch," "Aquaman and online" or "Aquaman and free trailer" carried with it an 18.6 percent chance of leading to a site that's tested positive for spyware, adware, spam, phishing, viruses and/or other malware. That makes the man in green and yellow number one on the list of "Most Toxic Superheroes" online, well ahead of luminaries like Iron Man, Superman, Thor, Wolverine and Spider-Man.

And why, you may wonder, is McAfee spending time (and, one would assume, money) coming up with new ways to say that Aquaman sucks? "With the resurgence of the superheroes into mainstream movies (think Iron Man, Hulk, Captain America to name a few), hackers are leveraging their popularity to target consumers. Hackers are most successful when they can attract a large number of victims," Siciliano wrote. "One way to target big crowds online is to track current events-everything from celebrity meltdowns and natural disasters to holidays and popular music-and now, superheroes."

That doesn't explain why Aquaman would top the list, assuming a direct correlation between the popularity of the character and the likelihood that someone would search for it. Perhaps it's a stealth maneuver - "Nobody would ever think we'd waste our time with Aquaman!" - or maybe it's just the vagaries of McAfee's statistical model. Whatever the reason, at least Aquaman is finally number one at something - but he's still nowhere near as cool as Namor.