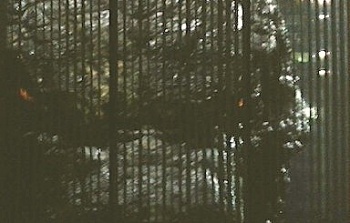 Legendary Pictures has released our first, official look at the star of 2014's Godzilla, and the giant lizard looks none too happy about it.

Godzilla really shouldn't need any introduction on a site like this, but if you've somehow spent the past 70 years displaced from time, we'll cover the basics. Initially conceived as an allegory for the unchecked destructive potential of atomic weaponry, Godzilla became an immediate hit with fans and has become something of a symbol of the Japanese film industry. His films, though formulaic and simple, always center on at least one giant monster smashing up the countryside, and apparently that's a concept that mankind is inherently attracted to. To wit: It would be easy to argue that Godzilla kicked off the "kaiju" film genre, which recently spawned Guillermo del Toro's worryingly underloved Pacific Rim.

Hollywood has attempted to glom onto the Godzilla phenomenon before, with generally terrible results. Roland Emmerich made an American Godzilla flick in 1998 that was less "classic Godzilla" and more "mindless excuse to shill Taco Bell and Doritos while Matthew Broderick battles velociraptors with gumballs."

Legendary Pictures hopes to do better with its Americanized Godzilla film, which is slated to debut on May 16, 2014. The first step in this process is creating a monster that looks like the classic depiction of Godzilla - the 1998 creature was some kind of angry iguana, we believe - and to reassure fans that its film will adhere to tradition, Legendary has released the first official image of Godzilla from its upcoming movie. That'd be the sneering face you see at top-right.

Granted, that's not much to go on, but what do you think? That mug looks very familiar, and the subtle use of modern technological tricks agrees with the beast. Everything about this image instills faith in me that Legendary is committed to delivering a retro-faithful Godzilla film, and that's exactly what fans are hoping for. Something is bound to be lost in translation, but if Legendary can deliver a huge lizard stomping around major metropolitan areas while occasionally breathing nuclear fire on assembled groups of military personnel, I'll be pretty happy.

Now it's your turn. Comments below. How do you feel about the new Godzilla? Love him? Hate him? Wish he was available for snuggles? Say your piece.