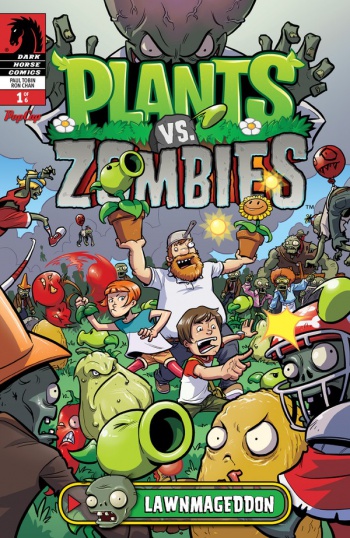 The first issue of Dark Horse Comics' Plants Vs Zombies is available for the limited-time price of free.

The original Plants Vs Zombies was a wildly successful hit that eventually spawned an enormous merchandise line. Now, with Plants Vs Zombies 2 coming out this summer, PopCap is already unveiling its next wave of adorably zombified media. Even Dark Horse Comics will contribute with Plants Vs Zombies: Lawnmageddon, a six-issue series published under PopCap's seal of approval. Created by Paul Tobin and Ron Chan, Lawnmageddon has launched as an iOS exclusive and will see print in a hardcover volume later this year. The first two issues are currently available for download, and as an extra incentive, the first issue is completely free for the duration of San Diego Comic-Con.

Plants Vs Zombies: Lawnmageddon centers on Crazy Dave, his niece Patrice, and "young adventurer" Nate Timely. When a zombie horde tunnels its way through the local sewers, Nate and Patrice escape to Dave's House, which is seemingly defended by sentient plant life. Various in-game plants and zombies make appearances in the comic, including Dr. Zomboss, whom the cover implies is orchestrating the attack from behind the scenes.

Future issues will be released on a weekly basis every Wednesday, while the hardcover book will reach store shelves this November. Until then, anyone with an iOS device nearby can download the series using the Plants Vs Zombies Comics app.