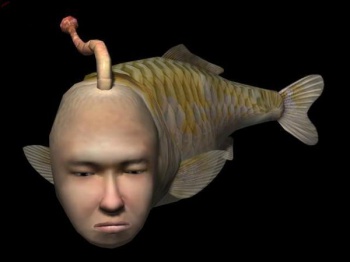 Two Seaman-related trademarks have been registered in Japan, possibly hinting at sequels for the Wii U or 3DS.

Of all the off-beat, bizarre videogames out there, Seaman probably takes first prize for strangeness. A Dreamcast pet simulator that used a microphone attachment for communication, Seaman challenged players to raise a crass and deprecating fish with a human face, even as it insulted you in the process. The game failed to take off in North America, but remains the third best-selling Dreamcast game in Japan, and even attracts morbid curiosity from today's gamers. Perhaps that interest is what inspired designer Yoot Saito to push for a handheld re-release, and the effort could finally be paying off. Nintendo has registered two trademarks that suspiciously sound like Seaman revival attempts, or something frighteningly similar to it.

If a Seaman game were to be developed, either the Wii U or 3DS would be appropriate platforms thanks to their built-in microphones. I'll even admit that the touchscreens could provide interesting gameplay opportunities, although I suspect that Seaman wouldn't appreciate the interactions. Whether we turn our televisions into creepy fish tanks, or carry a Seaman in our pocket, will now depend entirely on where Nintendo goes from here.