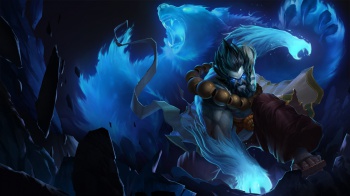 Udyr's first ultimate skin is now available at a discounted price for a limited time.

A few weeks ago, Riot games teased Udyr fans with an upcoming ultimate skin: Spirit Guard Udyr, which features entirely new animations, voice acting, and particle effects. Spirit Guard Udyr is now available to purchase for the discounted price of 1950 RP for four days following its release. There's also a bundle which includes the Udyr champion for 2295 RP. After the sale, the ultimate skin goes back to its full price of 3250 RP.

The skin features new animations for all of Udyr's four animal stances. On top of that, "When you reach rank five in a stance, you'll summon that animal spirit's physical manifestation, transforming Udyr into a feral force of nature." Spirit Guard Udyr will also strike down minions, champions and neutral monsters with stance-specific callouts and roar with triumph after vanquishing the Dragon and Baron Nashor with new event-triggered voice overs.

Accompanying the skin's release is an 11 page interactive comic, which you can read right here, as well as in your League of Legends client:


Purchasing the skin will also net you four unique summoner icons and profile banners. The previously released ultimate skin, Pulsefire Ezreal, featured some similar benefits. "Ultimate skins" are called as such because they usually offer a substantial upgrade of the character compared to standard and legendary skins, although all skins are purely cosmetic, and offer no in-game advantages.

It's nice to see Udyr getting some love. He hasn't gotten a new skin in a long while, despite being such an old and unique champion. I'm glad Spirit Guard Udyr made the cut instead of another Annie or Teemo skin.