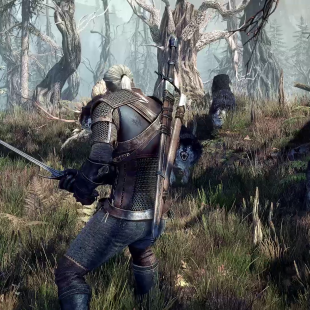 CD Projekt RED, the studio behind the acclaimed Witcher series, aims for success in the long term.

The modern day gaming industry is pretty fast-paced, perhaps too much so at times. With things like annual sequels becoming a norm, many publishers have made present day profits their primary concern, leaving some to wonder if current models for success can be maintained into the future. Comparatively CD Projekt RED, the studio behind the acclaimed Witcher series, has arguably been defined by a history of slow and steady growth dating back to its inception in the 1990s.

"I started [CD Projekt RED] in '94, right out of high school," said company co-founder Marcin Iwinski. "From the very beginning we wanted to make games. But we were realists. So the first thing was, "Can we really make it happen? Can we make a project [an RPG] of the scope you're dreaming about?" Achieving the company's goals would be an effort spanning the space of years. "We started a games distribution business in Poland... And at a certain point, all of the money that was coming from the distribution business, we were basically putting into development. It's a really long way, if you look at it, to where we are today." A lengthy path that allowed the developer to finance much of The Witcher 1 on its own, and then pay for all of The Witcher 2's development costs. "Whenever we made this money, we fully reinvested to production," said Iwinski.

The company's slow crawl to its present position, in turn, helped it to foster a long term view of profitability. "For a lot of companies, from a short-term business perspective, the famous hit-and-run strategy, there are still a lot of people applying this. And sometimes it works," he said. "I just don't think it's [the way we should run our business]. So we are really deliberately choosing what we want to do, and we will do it for as long as we are happy with the effect." Contrary as CD Projekt RED's philosophy may be to the "hit-and-run" strategies of other industry entities, it's an approach that seems to be working. The Witcher 2 is one the most widely acclaimed RPGs to come out in recent years and excitement is already building for its follow-up, The Witcher 3: Wild Hunt.