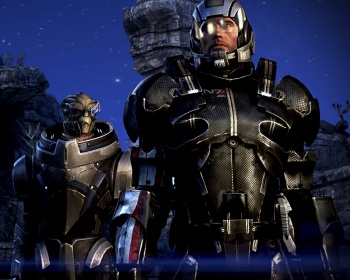 Bioware recently held meetings to discuss the characters and story of the next Mass Effect.

There's been a lot of speculation about the next game in the Mass Effect series. While Bioware has confirmed that the new entry will be separate from the saga of Commander Shepard, the developer has otherwise remained fairly mum on details involving anything to do with the new games. Recent Tweets from several Bioware employees, however, have pointed to progress.

"New #MassEffect story and main character reviews today," said cinematic director, Ken Thain. "This shit's gettin' real! I think the fans will be really excited to play this story." Mike Gamble, a producer on the Mass Effect series also described internal meetings involving the new game. "Lots of great @masseffect meetings today. Things are really moving forward. It's great to be involved in the universe again." These follow a July 15th Tweet from Yanick Roy, the director of Bioware Montreal, proclaiming that the new game will be "friendly both to old fans and newcomers."

Considering the uproar that Mass Effect 3 inspired, it will be interesting to see both where Bioware Montreal takes the next iteration of the series, and how fans react to it. While there have already been some loudly proclaiming their intentions to boycott all things Bioware, we have a feeling there may be at least a few gamers itching to jump back into the franchise's universe.