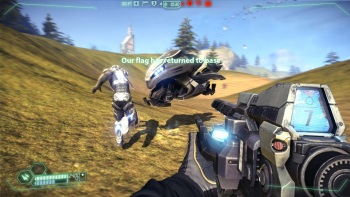 The CEO of Tribes: Ascend developer Hi-Rez Studios says tools are now in development that will allow users to create and add their own maps to the online shooter.

There was disappointment among fans of the free-to-play online shooter Tribes: Ascend last week when Hi-Rez Studios confirmed that no major updates to the game are planned for at least the next six months. The studio is currently focusing on Smite and said that Tribes: Ascend 2 would be more likely to happen than a big update to Tribes: Ascend, but was also careful to note that nobody's actually working on Tribes: Ascend 2.

That's not necessarily the end of the line, however. With the studio apparently content to leave the core game as-is, Harris said now is the time to have the users step in and take over. "We just feel like it's at a good point to have users maintain it. We feel that it's a complete experience, and we want to give users the tools to add their own maps - versus, say, us adding more guns that wouldn't benefit [the experience]," Harris told Rock, Paper, Shotgun.

Harris said some work toward a full-on SDK has been started, but the details have yet to be nailed down. "It's not anything that has a date yet or a full feature set, but that's the only real feature that we have in the works - aside from some small bug fixes," he said. "Ideally [we'll release the map-making tools] in the next six months. But it's a pretty fresh concept, so it doesn't have a committed date yet. There's a lot of ways we could go with it, as you can imagine. We just want to let people know that it's the next thing for Tribes: Ascend."

I'm not a Tribes: Ascend man myself so I don't know how enraged the community really was over the decision to stop future development, but this seems like a pretty decent way to keep players happy and keep the game relevant at the same time. After all, there are few things that can guarantee a game's longevity as effectively as handing the keys to the player base and saying, "You do it."