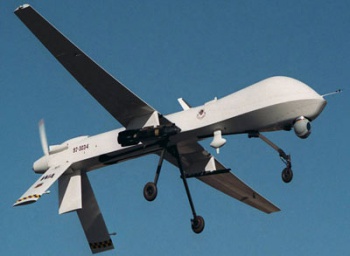 Deer Trail, Colorado, is examining the possibilities of offering hunting licenses - and bounties - for drones that fly over the town.

The word "drone" these days conjures up all kinds of mental images of unmanned aircraft flying overhead, spying on behalf of the U.S. government on all the naughty things you do when you think nobody is looking. It's government intrusion of the most galling sort - cheap, simple and almost impossible to avoid unless you want to stay inside forever and line your windows with tinfoil - which is why some people are so passionately and vehemently against them.

People like the citizens of Deer Trail, Colorado, for instance, which is now considering a new law that would provide drone hunting licenses and a $100 bounty for anyone who can shoot one down. "We do not want drones in town," Phillip Steel, who drafted the law, told ABC 7 News. "They fly in town, they get shot down."

Steel admitted that he's never actually seen a drone flying over the town but described the law as "very symbolic. Basically, I do not believe in the idea of a surveillance society, and I believe we are heading that way." He also pointed out that the licenses, which would sell for $25 for a year, could be a big source of revenue for the town, stating that they'd "sell like hotcakes."

"Even if a tiny percentage of people get online [for a] drone license, that's cool. That's a lot of money to a small town like us," added town trustee David Boyd, who said he's "leaning towards yes" on the vote. "[We] could be known for it as well, which probably might be a mixed blessing, but what the heck?"

Town Clerk Kim Oldfield said there's also the possibility that the town could use the bounties to promote itself, perhaps with a festival of some sort, a position backed by mayor Frank Fields. "It's all novelty. Do a little drone fest, get people to come out, have fun."