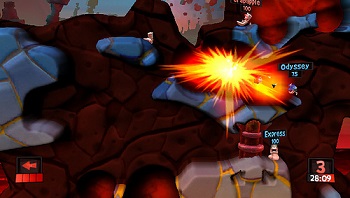 It's been said that the only things that would survive a nuclear apocalypse are Twinkies and worms. Well, perhaps not that last one, but worms are pretty hard to kill, if the game franchise is any indication. In what seems like its 30th incarnation, Worms Revolution Extreme is set to upgrade the turn-based game with new cross-platform and gifting features when it launches on the PS Vita later this year.

Worms Revolution Extreme will arrive pretty loaded, as the single-player campaign will have 47 missions and 25 puzzles. However, Worms is best with friends, and multiplayer comes with Deathmatch, Forts, and Classic modes. Revolution Extreme use the Vita's touch screens, with the front screen for inventory and camera control, and the backscreen for aiming. It will even talk with the PS3. Cross-Platform Continuation Play will let players continue a saved game on their PS3 or vice versa, and the new Treasure Mode lets players on either system link up and unlock "10 special gifts".

The Worms series stretches back to 1995, when it launched on the Amiga. Since then, it's received dozens of sequels, spin-offs and ports, all by Team 17. With Revolution Extreme on the Vita, Worms has now been on everything from the Jaguar to Facebook.

Video Games: 10 Ways Civ: Beyond Earth Is Nothing Like Civilization V Greg Tito 19 Comments
Comments on