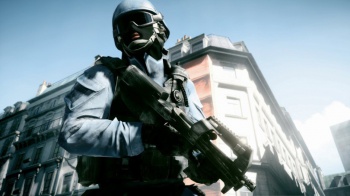 Operation Metro, the most played map from Battlefield 3, will also most likely return in Battlefield 4

At an press event organized by EB Games Australia, EA showed off some exclusive footage of it's upcoming shooter, Battlefield 4, revealing a few new details about the game. Specifically, building destruction will play a much bigger role in BF4 that its predecessor, you can play the new "Commander Mode" both in-game and on a tablet, and fan-favorite Battlefield 3 map Operation Metro will most likely be making a return.

Fans of Battlefield: Bad Company 2 were a bit perturbed to discover that the building-falling-over mechanics in Battlefield 3 weren't quite as good as they were in BC2. While maps in BF4 can't be completely leveled, EA Marketting Director David Silverman assures us that BF4's destruction will be "much more dramatic" and will be similar to BC2's destruction.

He goes on to say that they are toying with the idea of letting players use collapsing buildings to destroy MCOM stations, like you could in BC2. Players will also have the ability to cut the power in indoor maps, in order to use the darkness and the stalled elevator shafts to their advantage.

Silverman also said that confidence in its skills in building multiplayer has led to DICE spending more time on creating a good singleplayer story. He assures us that this time around, NPCs will be more human, and the SP campaign will have a much bigger impact.

Players on the console platforms can expect a more integrated Battlelog system and the return of server rentals, while PC players will also be gaining a newly upgrade Battlelog, though it isn't known whether this will be integrated into the game or remain as web-based affair.

While no official system specs have been offered, the PC specs are reportedly very similar to BF3's specs.