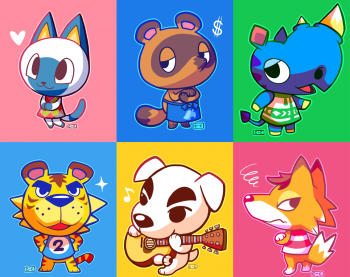 It's got the potential to be one of Nintendo's best summer sellers.

Animal Crossing: New Leaf, Nintendo's 3DS town builder, has turned into one of its biggest summer success stories. Nintendo's sold more than 505,000 physical and digital copies of Tom Nook's crime saga in June alone. Bear in mind, Nintendo sold 3.6 million units of all its 3DS titles in the last six months, which means that, of the 3.6 million figure, one month's worth of Animal Crossing: New Leaf makes up 14% of total 3DS sales overall for the first six months of the year.

It's doing pretty crazy business over at the Nintendo eShop too. More than 20% of Animal Crossing: New Leaf's sales were digital through the eShop, making it the second top eShop seller overall, right behind Fire Emblem Awakening. July numbers aren't known, but are looking pretty good, so Nintendo's confident that New Leaf will be its breakout summer hit. New Leaf is also helping sell 3DS hardware; its exceptional launch, together with the continuing success of Nintendo veterans Donkey Kong Returns 3D and Luigi's Mansion: Dark Moon, helped push hardware sales up 40% over the same June period last year.

So, want some bells? You know you do; everyone does. And I know just the fella to lend you some.