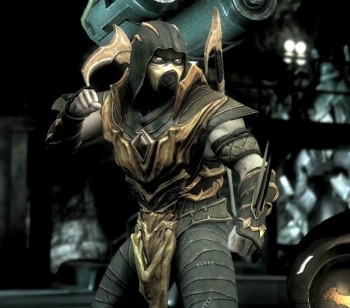 If anything has been missing from the DLC characters created for Injustice: Gods Among Us it'd have to be proper STAR Labs missions. That all changes on Tuesday.

Injustice: Gods Among Us is a meticulously-crafted fighting game based on the iconic characters of the DC Comics universe. Not only do you have your standard fighting game modes like online versus combat and a lengthy story mode, but the game also offers over 250 STAR Labs missions, which give each of the game's characters a chance to strut their stuff in 10 missions designed specifically for their talents. It's a neat scheme and these missions serve to massively extend the game's shelf life.

Unfortunately, when NetherRealm started rolling out new downloadable characters for the game, it didn't think to offer new STAR Labs missions for these additional heroes/villains/whatever Scorpion is. Come July 23 however, that all changes.

Doing some quick math, when you combine this upcoming DLC with the additional STAR Labs missions offered in the Red Son DLC pack, that brings the total number of missions in the game to a massive 300 - a figure that only becomes more impressive/daunting when you realize that "completing" the game requires players to earn all three stars in each of those missions.

Expect more information on these new missions to emerge very soon. July 23 is next Tuesday, so unless NetherRealm plans to stealth-launch 40 new STAR Labs missions, we imagine there will be an official announcement with more complete details sometime soon.