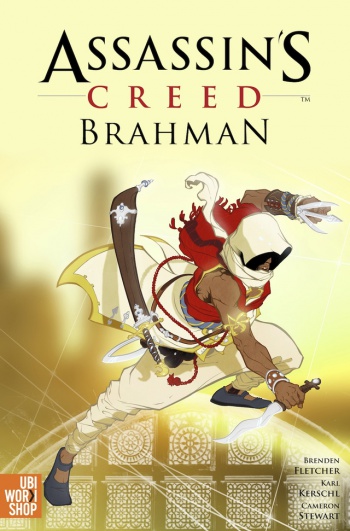 One of the best things about the Assassin's Creed series is that historically-speaking, there are a great many options to explore. Ubisoft has no shortage of time periods and cultures to set an ancestral flashback in, although sadly, even annual release schedules won't let it cover them all. Thankfully, branching into media like comic books is one great way to experiment and tell stories that wouldn't fit the scope of the games. This year's Comic-Con has presented one such example with Assassin's Creed: Brahman, a graphic novel set in 19th Century India that, on top of offering a new environment for graceful stabbings, appears to be canonical as well.

Brahman is set in a version of India described by Ubisoft as "a land of mysterious golden palaces and cursed treasure chambers held in the iron grip of British colonial rule". The book introduces new assassin Arbaaz Mir who, just like Connor in Assassin's Creed III, opposes British rule in a very direct and upfront kind of way. The series is written by Brenden Fletcher with art by Assassin's Creed comics veterans Cameron Stewart and Karl Kerschl.

Assassin's Creed: Brahman could prove to be a very interesting experiment for the series. Most of the games so far have focused pretty heavily on Europe and the Western world. At the very least, India would offer an entirely unique culture and visual aesthetic that helps Brahman stand out in the larger series, and adding an Indian ancestor to Desmond Miles' growing family is a nice touch as well. There's even a part of me that wishes India was the setting for Assassin's Creed IV, but I suppose if Brahman sells well, then the concept could be revisited for sequels or DLC.