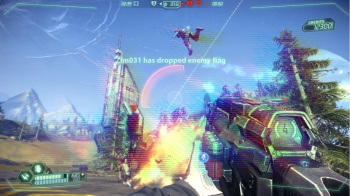 There's been a lot of vocal disappointment from Tribes: Ascend players lately. Developer Hi-Rez announced last week that there would be no more content updates to the free-to-play shooter, which many interpreted as the sealing of the game's coffin. In response to this, Hi-Rez's Todd Harris has explained the rationale behind the decision. The way he sees it, there's no need to keep updating the game because it's functionally complete - now it's time for gamers to dig in and enjoy the finished product.

"Since launch, we added 54 new weapons," Harris points out. "We added a new game mode, a new leveling system, custom servers, server browser, shielded base assets, 29 new maps - all free - and all that in a brief period of time. We also added an option for people to pay one price and get all the weapons ... You can get all the gameplay elements for the price of a normal game. It's fairly complete in its content."

Much of the confusion seems to be a result of that unique business strategy. In contrast to other free-to-play FPS games like Team Fortress 2 that rely on constant development to keep things fresh, Tribes: Ascend is essentially a boxed product that you can buy a la carte. There's more than enough content to last, especially with a level editor on the way, and by recognizing that the game is as good as it's going to get, Hi-Rez can devote most of their staff to creating new games.