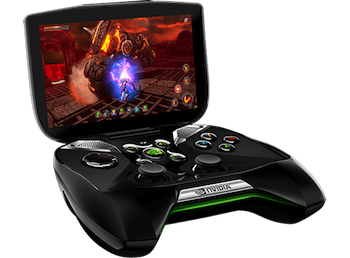 Fans of Nvidia's entry into the portable console market won't have to wait much longer to get their hands on the device.

The Nvidia Shield will mark the graphics card giant's foray into the world of portable gaming. The company has been hyping the device for quite some time, and early orderers won't have to wait too much longer to get their hands on it. On an announcement on the Nvidia homepage, the company has announced that the Shield will begin shipping on July 31.

The Shield team's official statement is as follows:

"We want to thank you for your patience and for sticking with us through the shipment delay of your Shield. We have great news to share with you - your Shield will ship on July 31st.

Our goal has always been to ship the perfect product, so we made sure we submitted Shield to the most rigorous mechanical testing and quality assurance standards in the industry. We built Shield because we love playing games, and we hope you enjoy it as much as we do."

The Shield was first announced back in January of this year, as an android-based system boasting big screen, a full-sized controller, and the ability to even play some PC games. Nvidia CEO and co-founder Jen-Hsun Huang said that the Shield's engineers were inspired by the rapid growth of mobile and cloud technologies, allowing gamers to play away from fixed boxes.

It was originally set to retail for $349, but Nvidia dropped the price down to just $299 a few months ago.

It certainly looks like a cool little device, perhaps for PC gamers that are looking for a way to get some gaming on the go. Will you be picking one up on launch, or is the no room in the handheld gaming market for another contender?