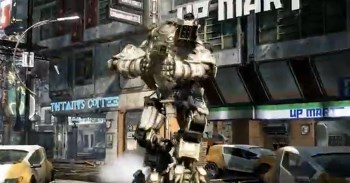 According to Respawn it will be possible for every player on the map to have a mech at the same time.

Respawn's Titanfall has perhaps the greatest concept of any online first person shooter ever devised. It drops you into a battlefield filled to the brim with people and things to explode and then gives you, your teammates, and your enemies giant mechs (Titans) to do it with. To say we're looking forward to popping into the cockpit of our very own giant robot would be an understatement. One thing we're not looking forward to doing however, is sharing our mechanized murder machines. We know that it can't always be our turn, but we'll also admit that we plan to hog every Titan we can get our hands on.

Then again, we might not have to. Commenting recently on Titanfall, Respawn revealed players and teams more keen on fighting in the cockpit then on foot will have ways to maximize the presence of Titans in matches. "Titans are available throughout the match and are set to a timer. You can decrease the amount of time it takes to call in a Titan by completing objectives and getting kills. Once you lose your Titan the countdown starts again," said Abbe Heppe, community manager at Respawn. "It is possible that everyone in the match could have a Titan on the battlefield at the same time." This possibility of mecha filled maps is, in turn, something the studio has to compensate for in its level design. "We have to have maps that support not only the Titans which are over 20 feet tall but also human-sized Pilots, so even our "smaller" maps are pretty large comparatively. What's cool is each map has areas for Titans and areas for Pilots, so you get these smaller maps built into the larger ones and all these cool pathways through them."

Despite the inherent fun factor that comes with controlling a giant robot, from the sound of things it would actually be a bit of a shame if players opted to ignore the game's take on more standard foot soldiering. Granted, if players opt to create a game where Titans are more common that's on them. That said, considering the diverse options that Respawn is trying to work into the game, we'd hate to see one experience fall to the wayside in favor of another. Which facets players choose to enjoy however, is something we'll have to wait until next year to see.