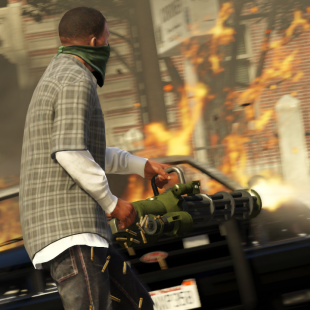 More than a few gamers are hoping to see the latest Grand Theft Auto land on PCs.

Announced on the anniversary of the disbarment of censorship proponent Jack Thompson, Grand Theft Auto V promptly built up the sort of excitement that only a series of its caliber and long, storied history can manage. As new images, trailers, and details began to emerge however, it became clear that current plans for the game's release were somewhat limited. While it was confirmed to be coming out on the PS3 and Xbox 360, there's been no official announcement of versions for the Wii U or PC. It's a move that's irked some and one that some gamers don't intend to take lying down.

Point in case, a petition to bring GTA V to PC has, over the course of several months, been picking up some significant steam. Started by Mike Julliard of Yarmouth, Canada, the petition asks GTA-makers Rockstar to bring Grand Theft Auto V over to PC. "GTA games have been a large part of so many people's lives and it's a big shame not seeing the newest iteration of the game being released on the most powerful platform," it reads. The petition, which has seen a steady uptick in support since its creation, recently broke 200,000 signatures and continues to climb towards its goal of 300,000.

In the likely case that Rockstar acquiesces, it wouldn't be the first time the studio had waited to reveal a PC version of its games. Grand Theft Auto IV, for instance, was also only announced for PS3 and Xbox 360 initially with a PC port confirmed months later. Here's hoping that winds up being the case here as well, and that PC gamers don't get left out in the cold with their console counterparts having all the fun.