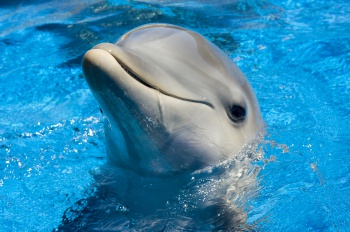 Despite our overwhelming hubris, humanity did not invent the concept of naming individuals. Dolphins have been doing roughly the same thing for millennia.

Dolphins are incredibly smart creatures. Not only do they have the mental capacity to bond with humans and learn the complex routines taught at places like SeaWorld, but they're also smart enough to coordinate underwater attacks, and even plot out horrific acts like aquatic sexual assault. On a less terrible note, they also "name" one another, according to recent findings by researchers at Scotland's University of St. Andrews.

Before you get too excited, there aren't any dolphins named "Tim" swimming in the middle of the Pacific. Not only because that's a terrible name for a dolphin, but also because dolphin names aren't actually names as we think of them. They're individualized series' of whistles which dolphins are capable of recognizing as a unique reference to themselves.

Why whistles? Simply put: Water doesn't transmit sound in the same way that air does. As a result, a complex, consonant-rich name like those used by humans (even "Tim") would lose much detail and be rendered largely useless underwater. Extended tones (such as series' of whistles and humming) are much less likely to shed details as they propagate, and this aurally simple nature makes it possible for these "names" to travel great distances beneath the waves.

"[Dolphins] live in this three-dimensional environment, offshore without any kind of landmarks and they need to stay together as a group," explains Dr. Vincent Janik of the University of St. Andrew's Sea Mammal Research Unit. "These animals live in an environment where they need a very efficient system to stay in touch."

While it's been known for decades that dolphins communicate vocally, science has lacked firm evidence that they name one another. The University of St. Andrews team however, recorded a series of what were suspected to be unique identifying vocalizations that they then played back through underwater speakers toward a group of dolphins. According to the study's findings, the dolphins would respond only when recoginzing their unique identifying noise, suggesting that these sounds function in much the same way as human names.

Now the question becomes: Why do dolphins name one another? That remains a mystery, but scientists believe they may have evolved this skill as it's simply a very efficient way for dolphins to communicate underwater. They're mammals and thus can't rely on a sense of smell to navigate the depths, so being able to locate one another by sound makes it far easier for dolphins to coordinate themselves in an often dark, truly three-dimensional environment.