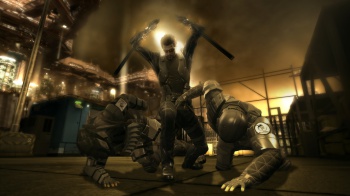 Square Enix hasn't been having the best of years financially, reporting some big losses in many of its sectors. This threw its studios and the Enix division into a panic-fueled turmoil that led to a confused, secretive new strategy for the embattled company, said recently departed Eidos Montreal founder Stephane D'Astous. "[Square Enix] has some things to learn about how to sell their games," he told Polygon.

"We brought three triple As to the market, and despite that great line up and those great critical reviews we still managed not to respect our financial goals, so that really shook up a lot of people. When the fiscal results officially came out, we were all surprised."

"We are in a situation that we have great games that could have sold more," he said. "They need to attack that very, very seriously. Last year was supposed to be a home-run season, but we didn't hit a single home run; maybe a double or a triple, but they weren't home runs."

D'Astous blames the very distinct divide that still exists within the company for a lot of its problems. He says a segregation still exists between Tomb Raider, Hitman and Thief publisher Eidos, and Square Enix, the Japanese giant behind the Final Fantasy and Dragon Quest series.

"Square Enix is in a tight spot because there are compromises that are made, investments that are made that should not have been and things that they didn't invest in but should have," he said. "Communication is very lacking."

His decision to leave was not an easy one, as he says, "Eidos Montreal was my home, blood, sweat and tears, call it what you want, for the last six-and-a-half years," but ultimately grew unable to deal with the problems of the publisher.