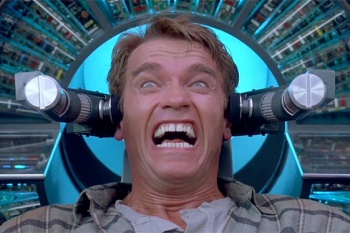 In news that's sure to make Philip K. Dick turn in his grave, scientists have successfully demonstrated an ability to implant memories within mammalian test subjects.

Imagine a world where you can have custom-tailored memories implanted into your skull. Want to be beautiful? Want to be a secret agent? Want to be Arnold Schwarzenegger and meet interesting, three-breasted prostitutes? Yes, that's blatantly the premise behind 1990's Total Recall, but thanks to new research conducted by scientists at MIT, that future might not be so far off after all.

A team of MIT researchers led by Nobel Laureate Susumu Tonegawa published a study in the latest issue of Science which records how Tonegawa's team was able to implant memories in the brains of lab mice. It's a involved process, but to put things simply, the researchers genetically engineered rodents capable of expressing the Channelrhodopsin-2 protein. Crucially, these mice only express the protein within the hippocampus region of their brains, specifically the neurons involved in the formation of new memories.

Once suitable subjects were bred, Tonegawa's team implanted a small fiber optics cable in the brains of each test mouse. Channelrhodopsin-2 is a light-sensitive protein, so when these cables were activated, the proteins within the mice's hippocampi likewise become active, essentially forming a memory of the light they "saw" within their minds. Even after moving the mice to a completely new test area, the researchers found that they could force the mice to recall the memory of the aforementioned light by reactivating the subjects' fiber optics implants.

Here comes the really interesting part: Not only can scientists create memories, they can also associate ideas like pain with those memories. Once it had been determined that the mice were retaining these false memories, researchers administered small electrical shocks to their feet. These shocks were timed to coincide with flashes of light from the fiber optic implants, and as a result the mice began to associate the light with a negative sensation. Even after they'd been moved back to the original test area, the mice reacted fearfully whenever the researchers lit up their tiny rodent brains.

The potentially horrifying ramifications should this discovery be scaled up to affect humans go without saying, so instead let's look at the positives. Soldiers afflicted with post-traumatic stress disorder could soon have more positive memories replace those terrible ones that haunt their minds. Childhood trauma could be erased with the flick of a switch. And of course, we could all learn kung fu by simply sitting back in a filthy chair and jamming a huge steel phallic metaphor into our brain stems.