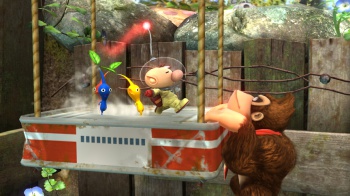 Fans of Super Smash Bros. Brawl's co-op Subspace Emissary story mode will be disappointed by the news that the upcoming Super Smash Bros. for Wii U and 3DS won't feature any kind of story mode, nor the impressive cutscenes that made Subspace Emissary so good. Game director Masahiro Sakurai explains that Brawl's story mode took a lot of time and effort to create, which was wasted because people uploaded the cutscenes to youtube.

"Unfortunately, the movie scenes we worked so hard to create were uploaded to the internet," said Sakurai. "You can only truly wow a player the first time he sees a [cutscene]. I felt if players saw the cutscenes outside of the game, they would no longer serve as rewards for playing the game, so I've decided against having them."

But it's not all doom and gloom. Sakurai understands that the movies were one of the coolest parts of the game, so he has assured fans the team will focus on having video sequences that would instead potentially benefit by being spread around. This is why we've had these cool intro video sequences for the Villager, Mega Man, and the Wii Fit Trainer. Sakurai says he wants to make similar videos for all subsequent new characters.

Sakurai confirmed that there would not be a Story mode in the game, but he assured us that the 3DS version would include a single-player feature that would "act as a separate mode from the standard versus play." He also noted that there will be some form of character customizability in the game that will alter character performance, though in what way is still unclear.