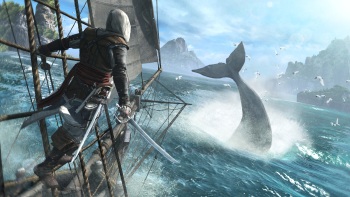 Assassin's Creed IV lets you do plenty of online assassinating, but don't hold your breath for multiplayer ship battles.

The naval combat in Assassin's Creed III was the most surprisingly entertaining addition the series has seen in a while - entertaining enough that ship-to-ship battles will be a large part of Assassin's Creed IV's gameplay. That portion of the game won't extend to multiplayer, however - Black Flag will feature several co-op and competitive multiplayer modes, but none of them will brave the open seas.

"You have to take into consideration that it took a very big dedicated team in Singapore about two and a half years to do it for the solo [play]," says lead multiplayer designer Tim Browne. "In Black Flag it's even better, but for solo. We've looked at it and we've considered it. We seriously considered it. We think it would be cool, but at the same time we tried it, and for technical reasons it's impossible."

The developers behind Black Flag are proud of the complex ocean and weather simulation that goes into naval combat, but it's that same complexity that makes it difficult to implement multiplayer naval combat that stacks up against the single player experience. That, and the fact that the game is headed to as many platforms as possible, which makes any task that much more complicated.