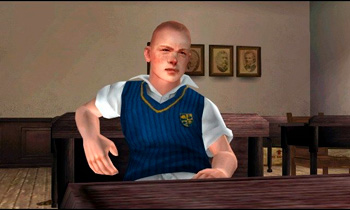 Bully fans could finally be getting the sequel that Rockstar teased two years ago.

Back in 2006, when Rockstar was best known for Grand Theft Auto and Max Payne, the launch of Bully must have seemed a little odd. Trading criminals for delinquent students and firearms for slingshots, the game turned a fictional New England boarding school into an open-world environment that players sought to master. Bully went on to be a highly critical success that sold millions of copies, but despite an occasional tease from Rockstar Games, there hasn't really been word of a sequel. Those intentions could finally be changing however, since Take-Two has finally filed a trademark for Bully with the United States Patent Office.

In fairness, the trademark application could be little more than an attempt to cover Take-Two's bases regarding future Bully games, as no official announcement has been made by the publisher or Rockstar. The application itself broadly covers "computer and video game programs and software; downloadable digital materials, namely, wallpapers, screensavers, digital music files, and graphics, videos, films, multimedia files, live action programs, motion pictures, and animation in the field of video games and computer games", all of which is par for the course for a claim. Still, given how well the original Bully and its "Scholarship Edition" did, I imagine another adventure in Bullworth Academy is a pretty strong possibility.