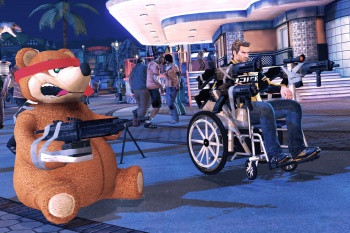 Zombies and superheroic cops take top billing in the next round of Microsoft's Games With Gold promotion, as Crackdown and two Dead Rising titles join the free games list.

These are the next three titles slated to join the Games With Gold promotion, according to Microsoft figurehead Larry "Major Nelson" Hryb.

As you should know by now, Games With Gold is a relatively simple attempt by Microsoft to win consumer mindshare. On the first and sixteenth of each month, the company rolls out a new (to the program) game, slashes its price to zero, and allows any Xbox Live Gold subscribers the chance to download and keep the videogame absolutely gratis. Neat, right? Of course there are caveats. Like I mentioned, you need an Xbox Live Gold subscription, and given the size of retail Xbox 360 titles, you'll likely need a fair amount of blank hard drive space.

With that primer complete, let's get back to the games. Dead Rising 2, as you may know, is an open-world, zombie survival game that is equal parts biological horror and wacky hijinks. One minute you're fleeing a mob of zombies and the next you're electrocuting a corpse back to death using a rubber Blanka mask strapped to a car battery. Dead Rising: Case Zero offers largely the same sort of gameplay, but it serves as a short prologue to the events of Dead Rising 2 - and, as a bonus, your progress in Case Zero can be carried over to Dead Rising 2.

Crackdown, by contrast, features no zombies. They wouldn't appear until Crackdown 2, where they utterly ruined the simple fun of being a super-powered cop with the ability to leap tall buildings and murder suspects by throwing cars at them. Crackdown isn't an accurate depiction of police work, but it a very entertaining excuse to screw around in a world designed almost entirely for that purpose.

Crackdown hits Games With Gold on August 1, and the two Dead Rising games debut on August 16. Consider yourself informed.