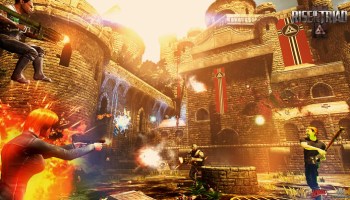 Rise of the Triad developers are marking the game's release by playing it online for 24 solid hours to raise money for Child's Play.

Interceptor Entertainment's Rise of the Triad remake launched today and the studio is celebrating the big moment with style and class by way of a 24-hour multiplayer marathon. Interceptor COO Khaled Ibrahimi and QA tester Aaron Alexander are livestreaming the session and inviting fans to join them for some chit-chat and violence.

The marathon grants you not only the opportunity to get kicked around by members of the Interceptor team (that Aaron guy is pretty good), but also the chance to do a solid for Child's Play. Spectators and participants are encouraged to donate to the charity during the marathon, and Interceptor will be handing out game keys and "other goodies" over the the course of the session to people who take part.

It's not clear when exactly the Rise of the Triad marathon will come to an end aside from a very vague August 1, but for as long as it runs you can watch the action on Twitch and make your donation at childsplaycharity.org.